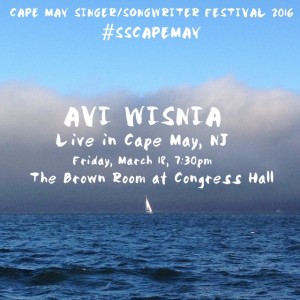 It’s not too early to hit the beach. For the 9th year, I’ll be heading down to the southern-most tip of New Jersey for the Cape May Singer/Songwriter Festival! I can’t wait to return to the Bed & Breakfast Capital to perform as part of this music industry conference. All performances are free and open to the public. I will also be hosting the After-Party, a special midnight songwriter’s jam on the last night of the fest, and you’re all invited. 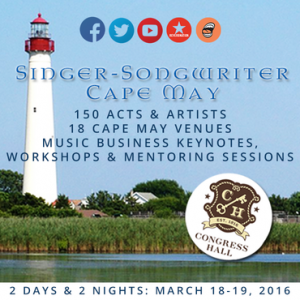 I’m returning to Cape May for my 6th time, performing at the Singer/Songwriter Festival in New Jersey! Come on down to Exit 0 for some great music. 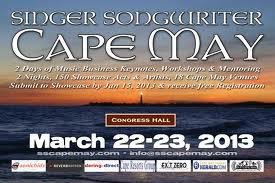 All official showcases are FREE & open to the public.

I love this time of year, right before the ball drops, after the mad dash to get everything done before the holidays, while we are still digesting all those cookies and pies.  It is a great time to look back on the year that was, to acknowledge our achievements so that we can get ready to look ahead and figure out how we are going to surprise ourselves in the year to come.

Quite a whirlwind year, people!  I made it to more places in, and out of, the United States this year than I ever have before.  I shared a stage with Ani DiFranco, performed to July 4th fireworks on a rooftop in Brooklyn, got featured on Best Week Ever’s blog, and discovered the Most Fun Street Corner in the World (surprise: it’s in Baltimore).  Here are some other highlights of 2011: The Year That Was…

◦ This year I was awarded the OutMusic award for Outstanding Jazz Song of the Year for The Back of Your Hand.

◦ Your votes placed me as a finalist in the summer’s BetaHiFi band competition in Philadelphia.

◦ Maoz Tsur – A new single for the holidays; a traditional Hanukkah melody, with a modern jazz spin.

◦ New Arrivals Vol 4 – Proud to be featured on this charitable compilation put out by MPress Records.

A lot of credit must go to Seth Kroll of Fam Jam Productions, director of Rabbit Hole, The Kazootorial and so many other projects we collaborate on. And I am very lucky to be able to make music with Toru Takiguchi, Gil Smuskowitz, Kim Garey, and all the other talented musicians who get stuck in a room/car with me.  Of course, none of these things would be possible without YOU!  For all the meals I was prepared, all the couches I slept on, all the messages and photos posted, all the doors and arms that were opened for me, I thank you.  I have some incredible friends, and I’m so happy to have added to those ranks this year. Your support and encouragement motivates me to be as creative and entertaining as i can be, and I can tell you without a doubt the best is yet to come!

Just you wait, ‘012 is gonna knock your socks off.  Sneak a peak at some dates below, it’s only the beginning.  Remember to stay up to date with the Blog, Facebook, or Twitter.  And to receive the most relevant info to where you live, sign the mailing list.  Want me to play in your town? Send any gig suggestions my way, and I’ll do the follow up.  Come out and see me some time soon. Bring cookies!

…and a happy new year

Fly Me To Brazil

I can already tell you what one of my 2011 highlights will be, and if you have been following along on The Twitter and The Facebook, you know what it is, too.  I leave later this week to spend a month in Brazil!  I am taking some time to find a little inspiration in the birthplace of Bossa Nova, meeting new people, learning new songs and performing a few shows.  (Trust me, I will fit some beach time in there somewhere.)  I’ll be splitting my time between Sao Paolo and Rio de Janeiro.  I can’t tell you how excited I am to return to Brazil and to play my first ever international shows!  Check out the dates on the tour page, including some updated upcoming US dates, and stay tuned right here to The Blog.  I’ll be updating it from Brazil to keep you posted on all my adventures down there.

I have also added some new stuff to the website.  Recent updates include the brand new Avi Wisnia Webstore where you can buy the new album, Tshirts, kazoos, etc.  You can also check the Gallery for new pics, radio interviews, and videos.  Poke around, there’s more.

Ok, tchau everyone!  I will be thinking about all you East Coasters under the snow while I’m lying on the beach in Rio 😉 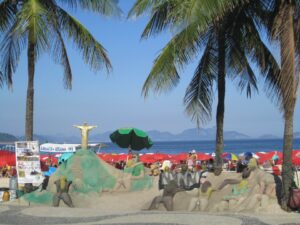