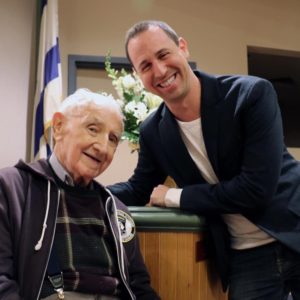 I was born in the United States, but because my grandfather is from Poland, I am also from Poland.

There are so many more things I want to tell you.
But for now, I encourage you to read my grandfather’s memoir: www.onevoicetwolives.com
and if you want to go back and revisit Poland with us, you can see my previous entries on this blog: #MyPolishWisnia

In Hebrew, when we celebrate, we often say “L’chayim” – “To Life.” Because we know that in the face of being denied the right to exist, the greatest act of defiance is to live. 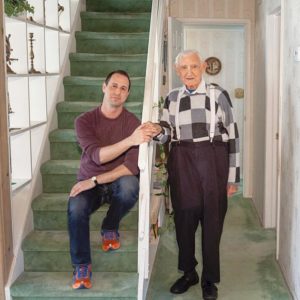 It’s good to be home.

*To read My Polish Wisnia from the beginning, click through to Poland Part 1: Prelude or Poland Part II: Prelude 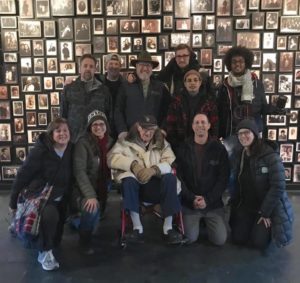 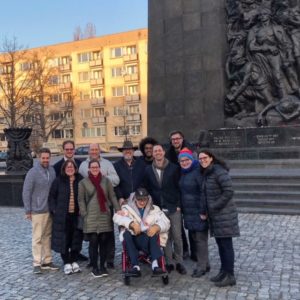 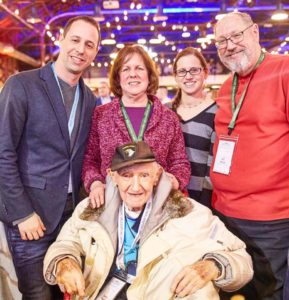 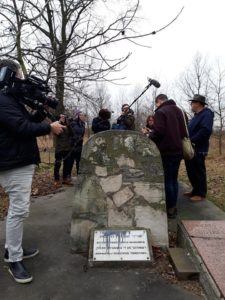 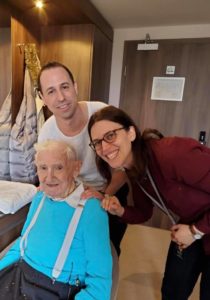 We are used to seeing visions of the Holocaust in black and white. But that is not what Auschwitz looks like when you are here. Because life happens in color: the past and the present, the good and the bad, the joyful and the boring and the horrible. all of it.

You could be fooled into thinking this place is beautiful as the sun sets. but that’s just another disturbing thing about Auschwitz. You look at the sky and the trees and the grass, and you realize: this is just a place. This a place, just like any other place is a place. Yes, these things happened here. But it could be anywhere. This could happen anywhere. 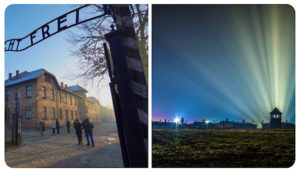 When we returned to the Auschwitz Museum, they had a surprise for our family… documents relating to my grandfather’s time as a prisoner of Auschwitz, documents with his name, and his number 83526 (which ultimately replaced his name as inmate of the concentration camp). 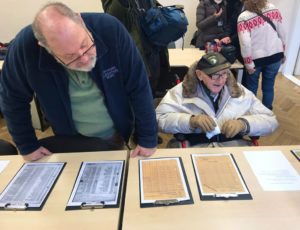 As the Nazis realized they were losing the war, they quickly burned as many of the documents as they could. Amazingly, some documents survived. The people that house the archives estimate that they have somewhere between 3-5% of what originally existed. Here is one of those documents.

This is a record of the day (March 19, 1943) my grandfather David Wisnia was late to prisoner roll call. His transgression was noted on this list, his punishment was that he was led to the gallows. A noose was put around his neck. Then, the platform was kicked out from under him.

Instead of his neck breaking, the rope slackened and he fell to the ground below with it. The guards laughed, he remembers. The SS guards were teaching him a lesson, but also amusing themselves. It was a joke. 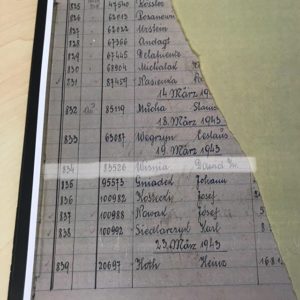 The Nazis were so meticulous in their running of Auschwitz that they kept records of everything. Prisoners. Punishments. Transports. Death certificates. This twisted accounting of everything they did – each horror & inhumanity endured – provides proof of that reality for us today.

This is the most well documented genocide ever committed.

We often repeat the phrase “Never Forget” when speaking of the Holocaust. But to never forget, we have to first – each and every one of us – acknowledge the reality of what happened here. We have to teach it and tell these stories. It is on us to carry this burden forward. 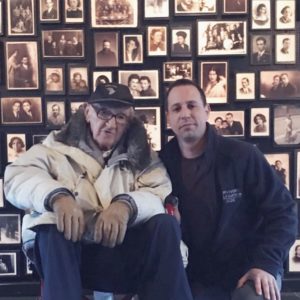 My grandfather took us to the building in Auschwitz where he did much of his forced labor as a prisoner, disinfecting clothing for inmates and new arrivals. It was known as the Sauna, because they would steam the clothes. It is sometimes open to museum tours. Today, my grandfather was our tour guide. 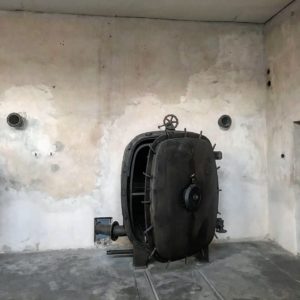 My grandfather met Ralph during the Holocaust. Both selected to work in the “Sauna” in Auschwitz, disinfecting the clothes of prisoners and new arrivals. They barely knew each other & rarely spoke, too fatigued from hard labor, too frightened of the Nazi guards, too full of sadness and despair. Now 75 years later, reunited in Poland, they get to have a beautiful meal and just talk. 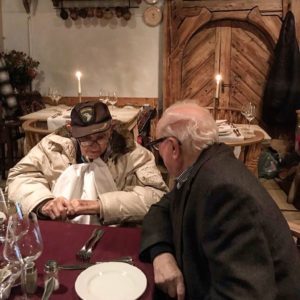 A momento for the survivors to commemorate 75 years since the Holocaust. 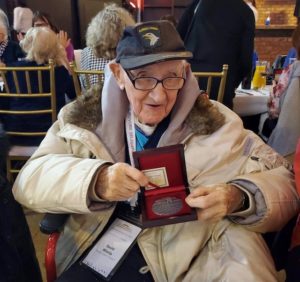 On Holocaust Remembrance Day, my grandfather sang in front of this stone building, the Death Gate to Auschwitz-Birkenau. It is a profound experience to be here in Auschwitz, commemorating the Holocaust, as a family. We are three generations bearing witness to the horrors my grandfather survived. And as hard as it is to be here, as hard as it has been to make this journey, it is important. If the Nazis were successful, none of us would be here. But we are here. And we are here for all those who cannot be here. We will not be erased. 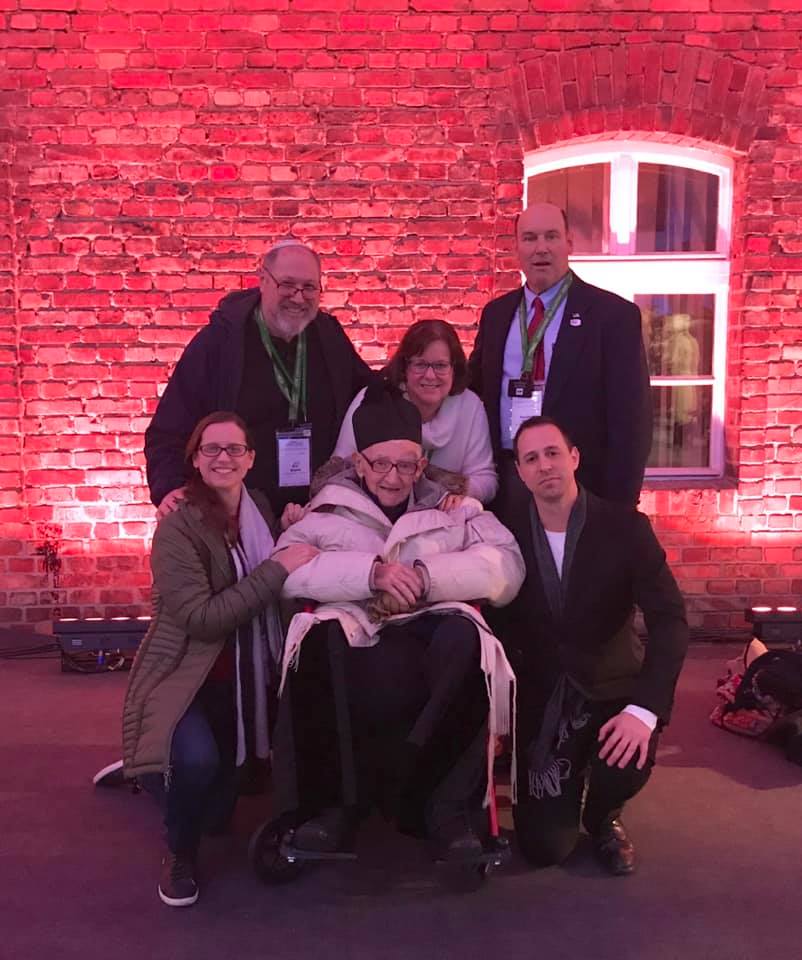 “Children and grandchildren walked beside survivors or pushed their wheelchairs into buildings made of brick and hatred, proof that the Nazis couldn’t turn every family, every future, to ash.

‘I feel a great responsibility,’ grandson Avi Wisnia said at a survivor dinner Sunday night in Kraków. “My grandfather’s story is my story. It’s the story of my family. I’m very aware that when he dies, I need to keep the memory alive, and the story alive, and these experiences alive.’

David Wisnia, a longtime cantor, stood before the crowd, the gates of Auschwitz behind him. Long ago, the Nazi guards took a liking to his voice, and it kept his future alive. He sang a prayer for the dead, then the Mourner’s Kaddish. Survivors sang along and cried.

Avi stood beside him, a singer like his grandfather.” … [READ MORE from The Philadelphia Inquirer] 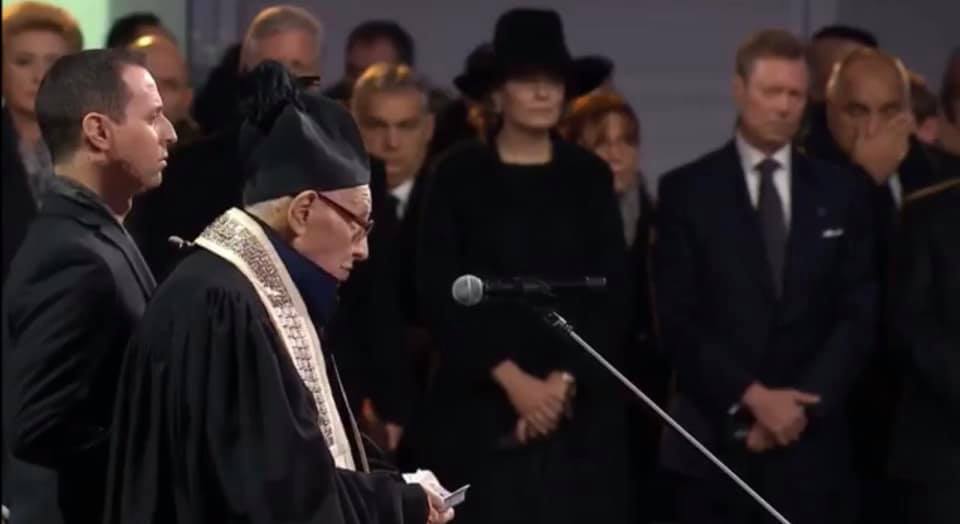 It is important to hear about the Holocaust from those who experienced it, now, while we still can.

You can still watch the 75th Anniversary ceremony. Use this english-language LINK to watch the entire event. Listen to several survivors speak about the Holocaust, in their own words, and hear my grandfather sing at hour 2:25 [WATCH] 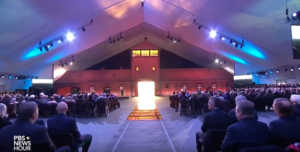 January 27, International Holocaust Remembrance Day, marks the 75th anniversary of the liberation of the notorious Auschwitz concentration camp. Dignitaries, heads of state, and 200 survivors will attend to commemorate the event in Poland, while millions will watch the live broadcast around the world. Cantor David S. Wisnia will return to the site of his imprisonment to sing a memorial prayer – to sing as he did many times when he was a prisoner in the camp, now 75 years later as a survivor.

the event can be live-streamed at www.auschwitz.org

Imagine Hell. Now imagine being rescued from hell, and returning. I can’t. I am trying very very hard, and I can’t. I am on a bus about to enter Auschwitz-Birkenau, watching my grandfather pass by the wooden-shelf bunks where he slept as a prisoner in the concentration camp for 3 years of his life, and I can’t even imagine. Can you? 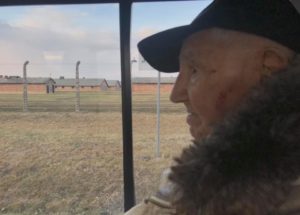 This will be my grandfather’s last visit to Auschwitz. It has been a hard journey and there are many times we thought our Saba was not going to be able to make the trip at all. But it was important for him to visit once again. 75 years later.

There were many years where he did not talk about the horrors of the Holocaust. Not to his family. Not to anyone. But slowly, over time, he has been willing to tell the story. and as he has gotten older, there has been a growing necessity to finally talk about all that happened to him. There is a sense of urgency, that he be able to tell his story with his own voice. Most of all, he wants you to know he was here. 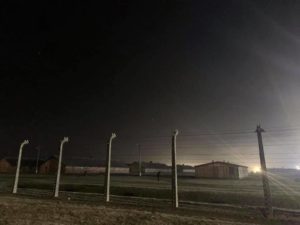