Before WWII, Poland had a thriving Jewish community. Over the course of the Nazi campaign, most of them – about 3,000,000 – were killed (along with 3mil Polish non-Jews), my grandfather’s entire family among them. Polish Judaism was decimated and never recovered, but there is now an exciting movement of “renewal” and revived Jewish activity that is slowly happening in the country. On Friday night, my grandfather led services for the community of Beit Warszawa, one of the only organized outlets for reform Jews in the country. (90% of the congregation are converts TO Judaism.) I accompanied him on piano as he sang in the cantorial tradition in which he was trained as a small boy growing up in Warsaw. and then we ate a lot. 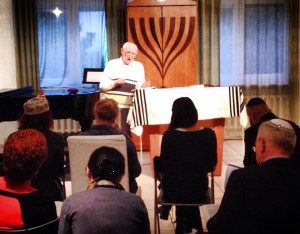 After the service, came the jam session. The Beit Warszawa congregation’s illustrious Lay Cantor, Iza Rivka and I harmonized on a new Hebrew song that she taught me, and we sang prayers familiar to these Polish Jews – which happened to be the exact same tunes I have been singing since my summer camp days (of course, because “wherever you go…”), and my grandfather sang 2 of his songs that he wrote during his time in Auschwitz, and then came the jazz standards and the Beatles and the Bossa Nova. and suddenly it was 12:30 in the morning. There might be video of all this some where… My grandfather can hang. 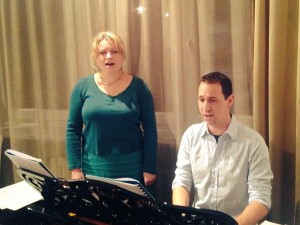 In Warsaw, you wash down a big meal with Zubrowka – bison grass vodka. I love that my grandfather looks so serious in the background there, but don’t worry, he had some too. 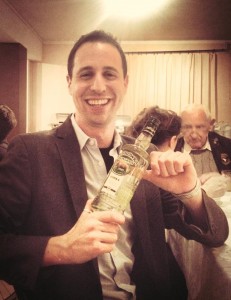