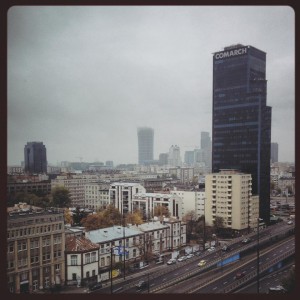 Warsaw, when we are here, you are never not grey. 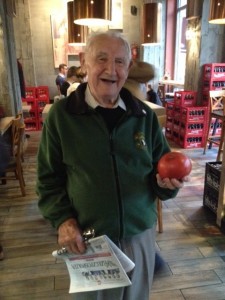 We have been indulging in Polish cuisine: pierogi, kielbasa, cabbage, kluski, and soup. Hot soup. Scalding hot soup. If the soup is not on the verge of boiling, my grandfather will send it back.

Soup is a part of his identity. It is one of the things he remembers most about life with his family, celebrating Shabbat as a little boy growing up outside of Warsaw. For as long as i’ve been around, it has always been one of his greatest joys to prepare his own chicken soup on Friday nights for all us Wisnias.

All of that is to say, i just had some incredible pasta bolognese. CUD MIÓD is known for its fresh ingredients, and we were marveling at the giant produce displayed at the front of the restaurant. Zucchinis a foot long, cabbages bigger than your head, tomatoes that you can barely palm. On our way out, one of our servers came over and just gave us one of their big, bulbous tomatoes.

Making friends wherever we go. 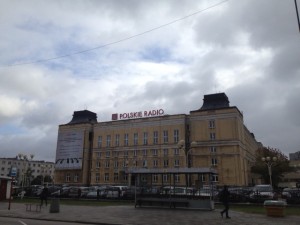 ‪My Polish Wisnia was not feeling well today, and we let him sleep in. Still, the show must go on, and people must know there is a show going on in order to attend the show that will be going on. Off to Polskie Radio. 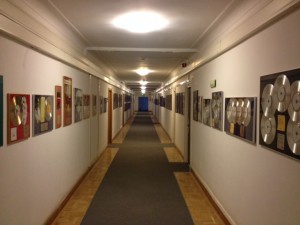 Polskie Radio is like the Polish NPR (My Polskie friends, you may correct the analogy here). My grandfather was very politically aware as a child, always interested in the conversations and political opinions his father would have. He remembers listening to Polskie Radio to get the current events. He was listening to Polskie Radio when Germany attacked Poland on September 1, 1939 – the day after celebrating his Bar Mitzvah. It is disappointing that he did not have a chance to speak for himself on the same radio station he used to listen to, but at least his voice was heard. They played 2 recordings from his old synagogue in Trenton NJ where he was featured as a soloist, backed by full choir and organ. They also played my newest recording, ‪‎Sky Blue Sky‬, which made its Polish Radio debut. Rivka talked about the role Beit Warszawa had in hosting us and putting the concert together, and I was asked about my link to my grandfather’s music and the influence he has had on me. 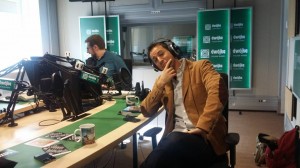 I grew up surrounded by liturgy and Jewish music, hearing my grandfather sing and teach as a cantor and congregation leader. When he sings, it has weight. Everything sounds of sadness and strength. He is always comfortable on stage, always happiest in front of a crowd. I never had any desire to be a cantor, but i can’t deny that my grandfather has shaped me as a musical performer. 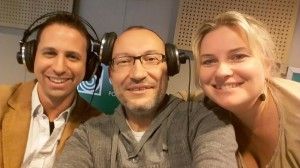 Our concert will be a sort of bridge between the old and the new; this is also what these trips have turned into for me. Experiencing my grandfathers story of pain and loss and understanding how it continues to play out; experiencing a new Jewish Poland emerging from the one my grandfather knew which was decimated; experiencing how my path has taken me in a different direction from my tradition but still trying to hold on to it at the roots; understanding the past and claiming it, and finding out how to carry it into the future.