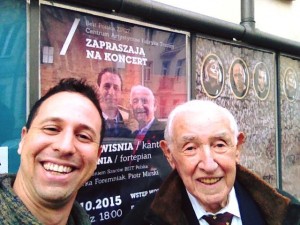 #‎MyPolishWisnia‬ and I have arrived! Here we are, greeting ourselves at our concert venue. Look at this beautiful poster the good ppl of Fabryka Trzciny put together! This is going to be one classy affair. See you inside. 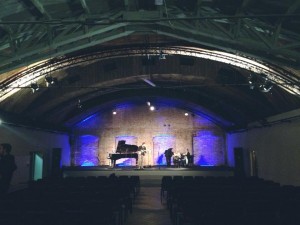 Sound Check at Warsaw’s Fabryka Trzchiny Theater. This old factory used to produce cigarettes, then marmalade, then shoes. Then it housed Russian prisoners. Now it’s a prominent 4-stage arts & culture center, repurposed but keeping the original factory aesthetics. And instead of Russian prisoners, now it houses artists like Esperanza Spalding, Noel Gallagher, and of course, The Wisnias. 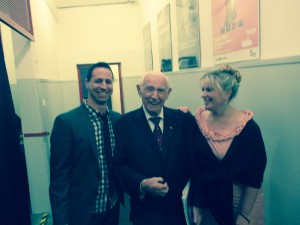 My grandfather was a singing star, a child prodigy of Poland. He studied with famous Cantors Gershon Sirota and Moshe Koussevitsky; he sang in opera houses, theaters and on Polish radio; he performed at the Tlomackie Synagogue as a featured soloist, backed by an 80-person choir. Whatever trajectory little Davidek was on was cut short, suddenly and violently, by the war.

Tonight, at Fabryka Trzciny, he is the star of Poland he was meant to be.