Winter in Poland. It’s like being in Pennsylvania, but with less vowels. 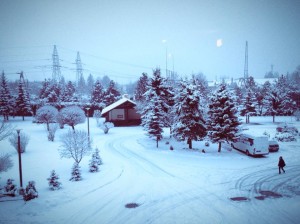 We boarded a train leaving Warsaw, heading towards Katowice on our way to the next destination: Auschwitz. We put our bags down on a random seat to get our bearings. Neither one of us had any idea how to read the ticket for our seat assignments. I found a very nice older couple who helped me identify our correct seats, which were next to them in a private cabin. I went back to get the bags, as my grandfather sat down with Mr and Mrs Adamczyk and started conversation. I put our bags down and began taking very unnecessary pictures of the train station, not realizing I was capturing the exact moment when my grandfather discovered that Mr Adamczyk grew up on the very same street as him in Warsaw, and that this man he just met had lived in a house very close to the one my grandfather lived in (after he and his family had been evacuated from their home). Though I only understood about every fifth word, we spent the next 2 hours in conversation, from the moment the train left Warsaw Central Station until it reached the end of the line. 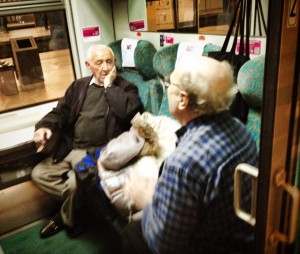