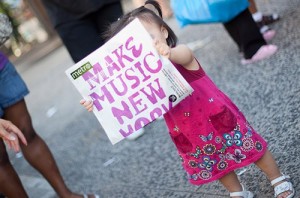 Williamsburg: The 7th Annual MMNY Brooklyn BBQ Block Party, at Kinfolk
Avi Wisnia: “New York City is one of the most vibrant places in the world for creative new music; this city is saturated with new talent. The MMNY festival puts music out prominently in the public sphere, allowing New Yorkers to engage with the music made in their city. It’s like, for one day, enjoying music is unavoidable! My event [4pm to 10pm] taps into one of the epicenters of new creative output within the city: Williamsburg. At our BBQ Block party, we will feature an eclectic variety of hot emerging music makers, a wild display of visual art, BBQ-themed snacks and summery drinks, all showcased in a unique impromptu sidewalk performance-space where artists can engage freely with the pedestrian crowd. And then, there’s a secret after party, which we’ll tell you about if you show up.”