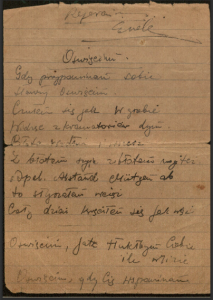 Singing saved my grandfather’s life. It is how he survived his time in Auschwitz. He would entertain the guards with songs like ‘Bei Mir Bist Du Schoen,’ and so became a sort of privileged prisoner in the camp, perhaps somewhat less expendable. During his time as prisoner, he actually composed a song – Oświęcim, a parody of life in Auschwitz-Birkenau, based on the name of the town where the concentration camp sits. Towards the end of the war, the night before the Germans evacuated every remaining prisoner out of Birkenau on a Death March, my grandfather wrote out his song and gave the paper to a fellow prisoner, Szaja, as a gift. They would meet again 20 years later in Israel as free men, as survivors, and Szaja would hand him back that very same paper. This song is now on display at the Holocaust Museum in Washington DC (view it HERE).

My grandfather taught me his song, Oświęcim, and I will perform it with him for the first time, here in Poland. 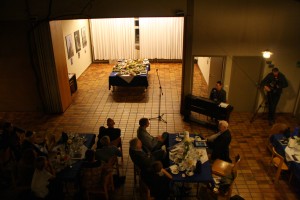 After dinner, they invited me to perform some entertainment for the attendees of the conference.

We had gathered at the Youth Meeting Center in Oświęcim, the town where Auschwitz was, and where it still is. We met wonderful people who grew up here, who have roots here. As a prisoner, my grandfather knew nothing of this town. All he knew was Auschwitz. Yet, he tells me that in his circles, the prisoners never knew this German word Auschwitz – they referred to the place in Polish based on where it was located, Oświęcim. Today, Oświęcim is a town with stores, schools, families, life. Like everything touched by the Holocaust, Oświęcim carries forward with it a complicated legacy. 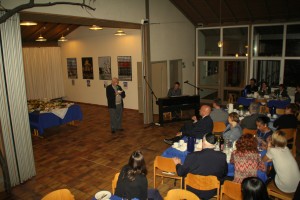 Later in the evening, my grandfather and I performed his song, Oświęcim, his song that he wrote as a prisoner of Auschwitz.

I cannot describe to you what it felt like to perform here. I cannot put it into words. I don’t even know what to call it.